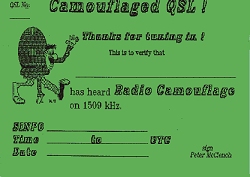 Did only appear twice. The first time via Radio Pirana, on mediumwave, the 10th of July 1993 and the second time in January 1996 via a US-relay on 6955 kHz LSB. This time with Jolly Jake as co-DJ to Peter. The operator Peter McClench did not find the pirate-DJ work to be fun enough.

Later back as WRCR – We aRe Camouflage Radio – and with a new DJ.

Address was via DPRS in UK.

We need more QSL-cards and also more info on everything.

We also looking for old issues of Pirate Reflections.