Made their first appearance on 17’th April 1977. The test program was put on air via the 150 watts transmitter of Radio Poseidon International. 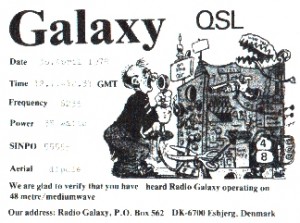 Three reports were received. In June a show was aired via Tower in England.

This Danish station hoped to get a transmitter of their own, but as far as I know, they had to be relayed.

We need more QSL-cards and also more info on everything.

We also looking for old issues of Pirate Reflections.